My journey from being a perfectly satisfied Solo-Witch to feeling my heart grow in it's capacity to love through womxn's circles.

My friend, Mary Houlihan, sent me either an email or a text (I looked for both and... dammit Apple, couldn't find either) in June of 2019. So, this is not word-for-word but you'll get the jist:

Mary: Becky, I just bought a ticket for Sarah Jenks' moon ceremony for SEPTEMBER! I don't know where I'll even be living then, but I know I have to go. Do you want to come with me?

Becky: That sounds amazing.. who is Sarah Jenks and where is this ceremony?

Mary: Sarah Jenks is a badass High Priestess, you will love her. The ceremony is in MA!

Becky: Fly into Providence. I'll pick you up and we'll go together.

I bought my ticket that day. I had no idea what to expect. I am a practiced solo-witch. Everything that I had ever done for my own transformation, up until this point, I did independently, alone, in private. I'd meditate and pull tarot cards pretty much every morning, set my altar, light sage, clear myself, clear my house... what was this about joining with other women? And why would I even do it? They don't know me, what if they cross a boundary? What if they don't like me? What if I don't like them? What if they don't accept me? What if they think they know more about ME than me!? Ugh! I was really in a tizzy... and still, a quiet, grounded part of me knew - I had to go.

The day came and it was a GORGEOUS one - the sun was shining, the air was crisp, it was lovely. I picked Mary up at the airport and we had a few hours to kill so we checked out the local stops in Medfield, MA. We stopped at a darling farm, Tangerini's, and picked up some sunflowers to gift to Sarah for hosting the ceremony and had a few bites before heading over. 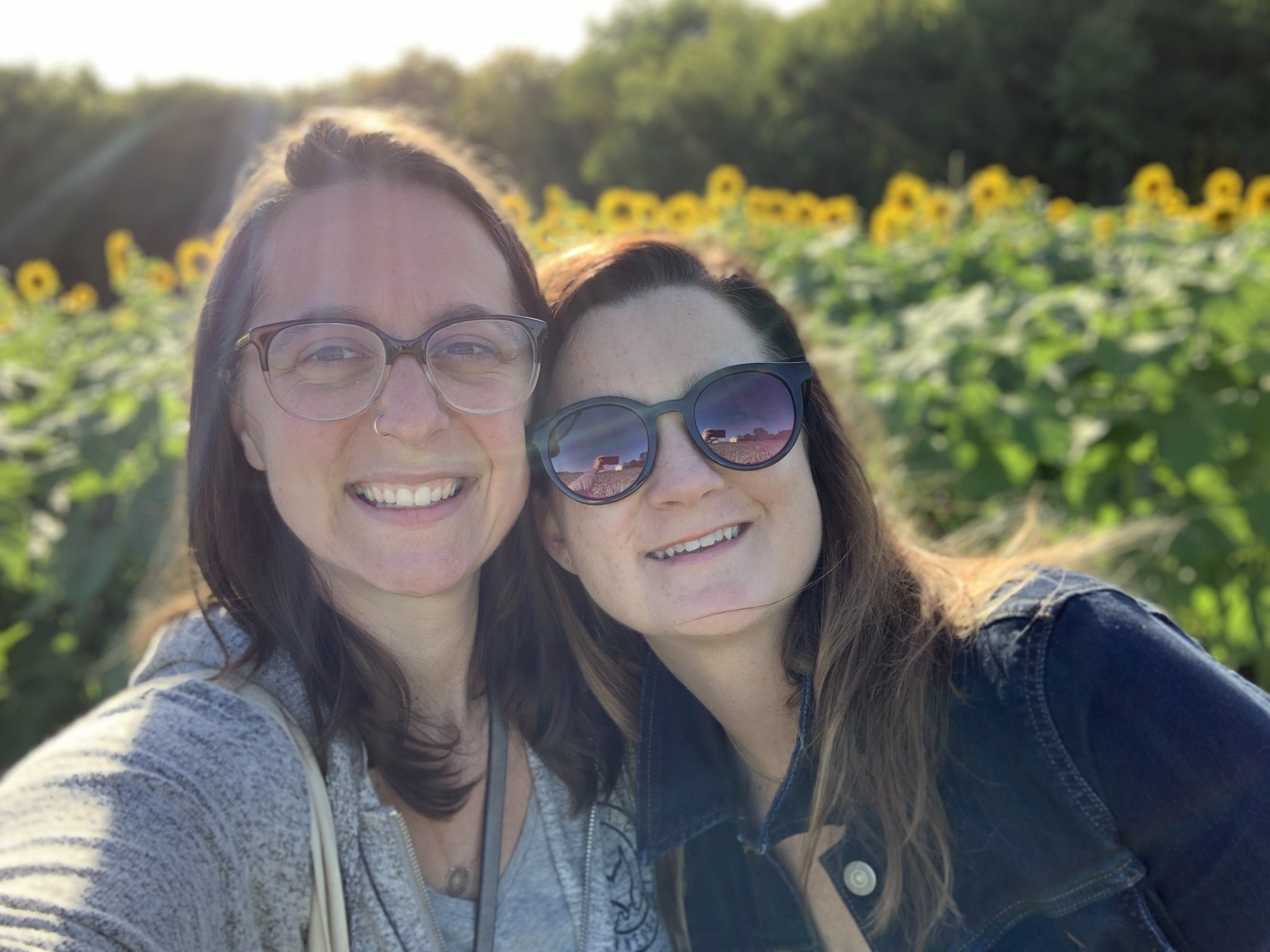 Sarah was outside when we arrived selling their farm eggs with her children and her husband, it was really adorable. The lodge was GORGEOUS. It was a circle-temple with windows almost all the way around and a steepled roof. Inside it was warm and the energy was SO loving - there was a fabulous sound system playing soft music. We were invited to find a seat on one of the floor seats (which looked SO beautiful in all white with white furs laying beneath each one), slip into meditation and find the quiet within ourselves.

Except... I wasn't alone. I wasn't in my meditation room in my house with my headphones on. I wasn't in a safe space where I could just relax and be myself. I was surrounded in a room filled with other women who were in front of me, behind me, to my right and to my left.

*BREATHE* I told myself. Just pretend they aren't there and do your thing.

So. I breathed, I tried closing my eyes, listening to the music and going inward. BUT... my eyes wouldn't close. I honestly couldn't keep them shut, they kept opening just a bit and I realized I was spending all of this precious meditation time trying to keep my damn eyes shut! So, I surrendered! My eyes would remain open and that had to be okay.

I focused on the blurred light of one of the candles sitting on the beautiful altar in front of me and let the glow take me inward. And then someone sat down next to me.

I breathed and focused on the blurred light of one of the candles sitting on the beautiful altar in front of me and let the glow take me inward. And then Mary coughed and shifted in her seat.

I breathed and focused on the blurred light of one of the candles sitting on the beautiful altar in front of me and let the glow take me inward. And then Sarah started sage-ing the space.

I breathed and focused on the blurred fucking light of one of the candles sitting on the fucking altar in front of me and thought "screw it... I'm not going inward". I waited.

Sarah began the ceremony by inviting us into a guided meditation. THIS I could do. She walked us through envisioning roots coming out of the base of our spine, reaching into Mother Earth, intertwining with each other until we reached the core of the Earth, herself.

But... wait... intertwining? What if I don't want whatever these other women are carrying in their roots? What if they have anxiety or fear? What if they're in pain or.... I quieted MY anxiety realizing what a hypocritical thought I was having and I surrendered my worries to the process asking The Goddess to help me only give and receive the highest form of Love with the other women in this room.

Next, Sarah invited us to find a sister across the room with whom we would hold their gaze.

Wait, what? I thought I would be able to get through this unnoticed... You mean I now have to be SEEN by someone else? Give me back my meditation room in my quiet house and my solo-practice, this was too much!

But. It wasn't. And. I did it. I found a sister across the room, I held her gaze and of course, NOW my eyes wanted to close *sigh*. I asked them to stay open in honor of this woman. And, they did.

Next, Sarah told us about the Moon and how connected Women are to her cycles. She shared that we, as women, are ever-changing and go through our own phases. That, it's in our nature to change our mind, to change our mood. That we are designed to ebb and flow like the ocean being pulled by the Moon - we are, after all around 60% water, just like the EARTH, of course the Moon would have her pull over us. She presenced the beauty and the honor of what it really means to be a WOMXN and gave us all permission to just BE, unapologetically.

She then invited us into a visualization and asked if we'd like to share what we saw. Which I didn't. Okay, I did. But I couldn't! I didn't know any of these women, how could I share, why would they care? What could I possibly say that would make any difference in their lives?

And the sharing started.

One woman was overwhelmed with being a mother and feeling all alone in parenting despite being married.

One woman was in the middle of a heart-breaking divorce.

One woman was post-partum.

One woman was waiting for a kidney donor for a transplant.

One woman was in between jobs wondering where her next paycheck would come from.

I was so, deeply, moved. What did all of these women see that I didn't? What made them feel so safe? So protected? So accepted in this circle that they could share their most vulnerable selves with complete faith that they would be held, accepted, witnessed and loved? What was I missing?

Then, it was time to release. We separated into multiple groups of 4. Three of us held the space for the fourth as she spoke aloud the feelings, thoughts, self-judgements, fears, worries that she was ready to release. When complete the three of us started at the top of her body and moved our hands all the way down bringing the energy she just spoke down, pushing it into Mother Earth for her to absorb and transmute.

And then it was my turn.

I let it all out. Every thought I had in my head just poured out of my mouth, and I let it. I could've stopped it, but why? What did I have to lose? I didn't know any of these women, and of all the places to feel secure in releasing, it would be here among all of the brave women who so courageously shared their own shadows.

And the container was held for me.

I released and was witnessed.

And, somehow, I felt better. I didn't feel shame. Somehow this group of 3 women holding space, hearing me, witnessing me in my shadow as I spoke aloud what I wished to release, made a difference. Maybe being a solo-witch isn't all that it's cracked up to be. Maybe I was a solo-witch because I didn't know I could be loved and held like this. Maybe I was a solo-witch because of a defense-mechanism, as a result of self-preservation, and maybe, just maybe, it was time to let myself be seen, be held and be in community.

And then... the ceremony completed with... my biggest fear. A dance party. I solo-danced much like Will Smith in the movie Hitch at 0:57 into the clip really hoping no one made eye contact with me or forced me to hold hands in a Kumbaya ritual. The song came to an end... and Sarah decided another was in order! I was sweating through my grey v-neck, but I made it.

On the ride home Mary and I couldn't stop talking about the entire experience, what we saw in our visualizations and how amazing being in a circle of women, just to be in a circle of women, was. I bought a ticket to the October Moon Ceremony the next day and have been back every month ever since.

In November I had the honor of being in Temple with 15 other women over the course of 2 full days with Sarah. By the end I shared (yes, I actually raised my hand and shared verbally) that being a Solo-Witch my entire life was nice, and, I always felt like I was walking on air. That at any moment I could put my foot down and fall right through. After those 2 days of being in ceremony with these sisters, I felt like all of their hands were creating a path that I was walking on, no longer worried that I might fall through the air, but with faith that beneath my feet were their strong, supportive hands, holding me up, and that I offered my hands to each of them in return.

I have learned through these few, but meaningful experiences, that sisterhood is deeply important. That women gathering just to gather is one ancient form of filling each other up with the love and strength we need to be our Authentic selves. It's really as simple as that. I have learned that I love my solo-witch practices, and, being in community with other women is a support like nothing else I have ever felt.

I am forever grateful to Mary for inviting me, to myself for accepting the invitation and to Sarah for living her mission of inviting women to be their authentic selves.

And now, I invite you to go to your local Meetup or Eventbrite and look for a womxn's circle, a Full Moon Ceremony, a gathering of womxn. Let yourself be seen and held by the strength and love of the womxn around you - and, if you need a friend to get you there, invite her, and know that you might be opening a world of opportunity for her, too.