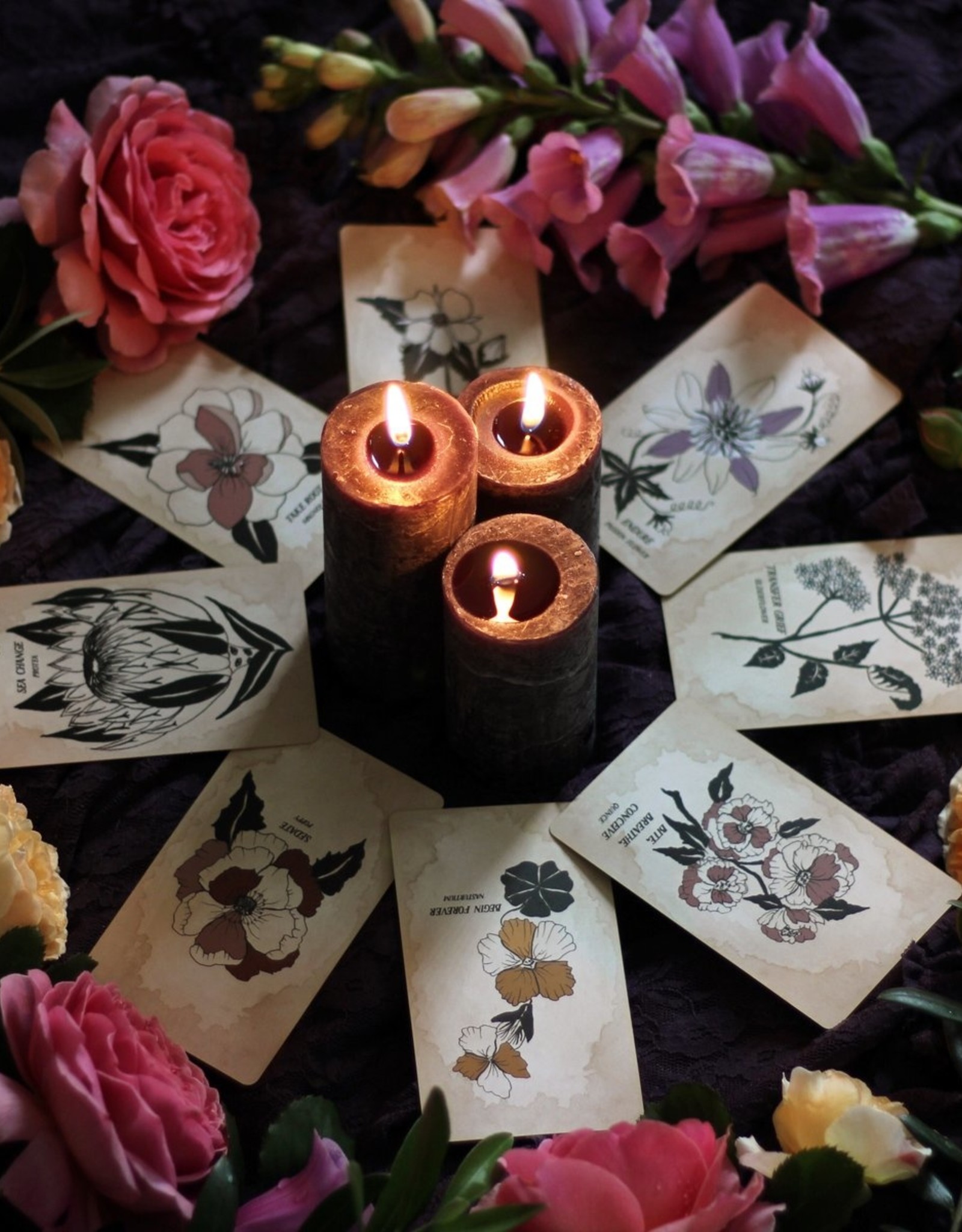 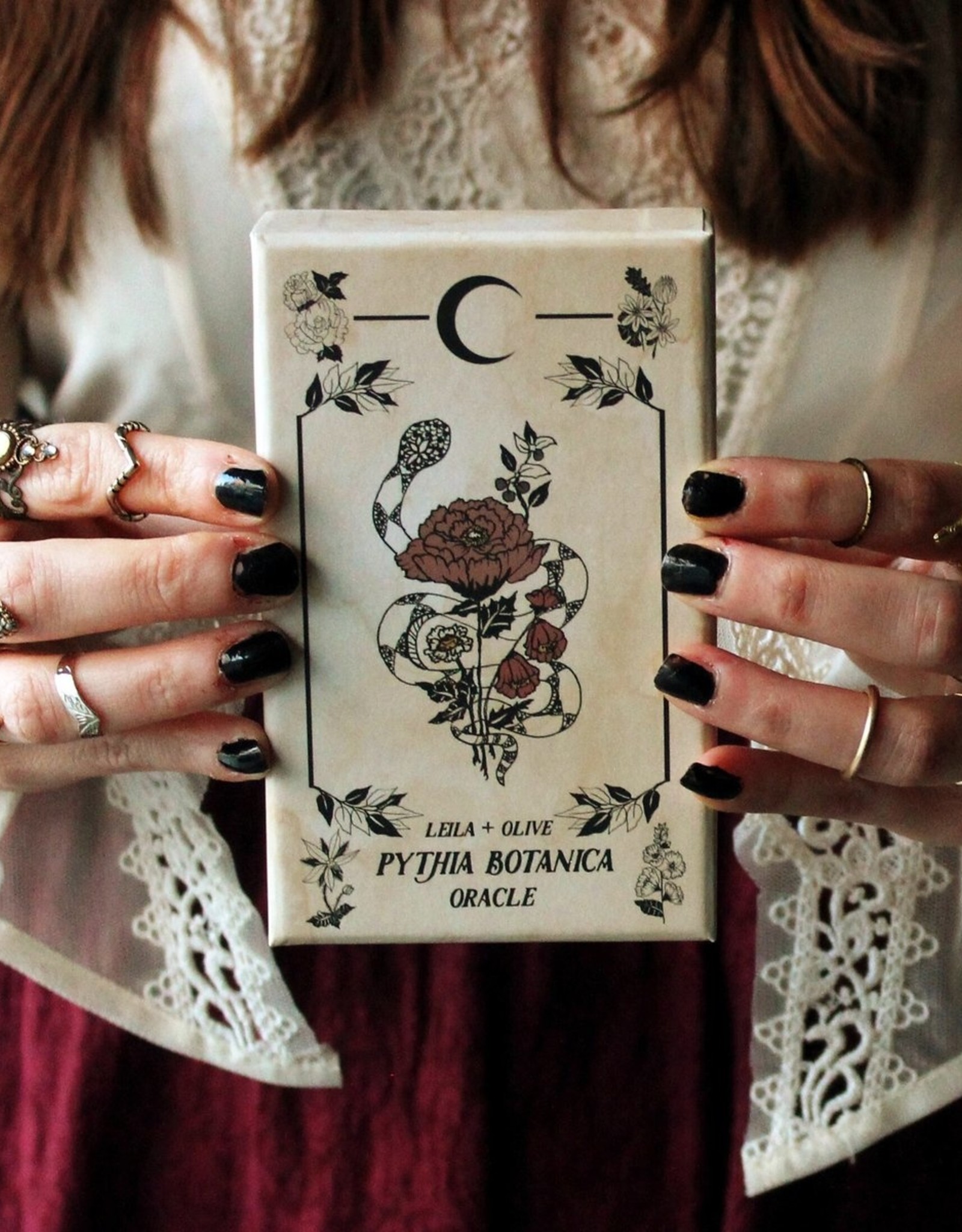 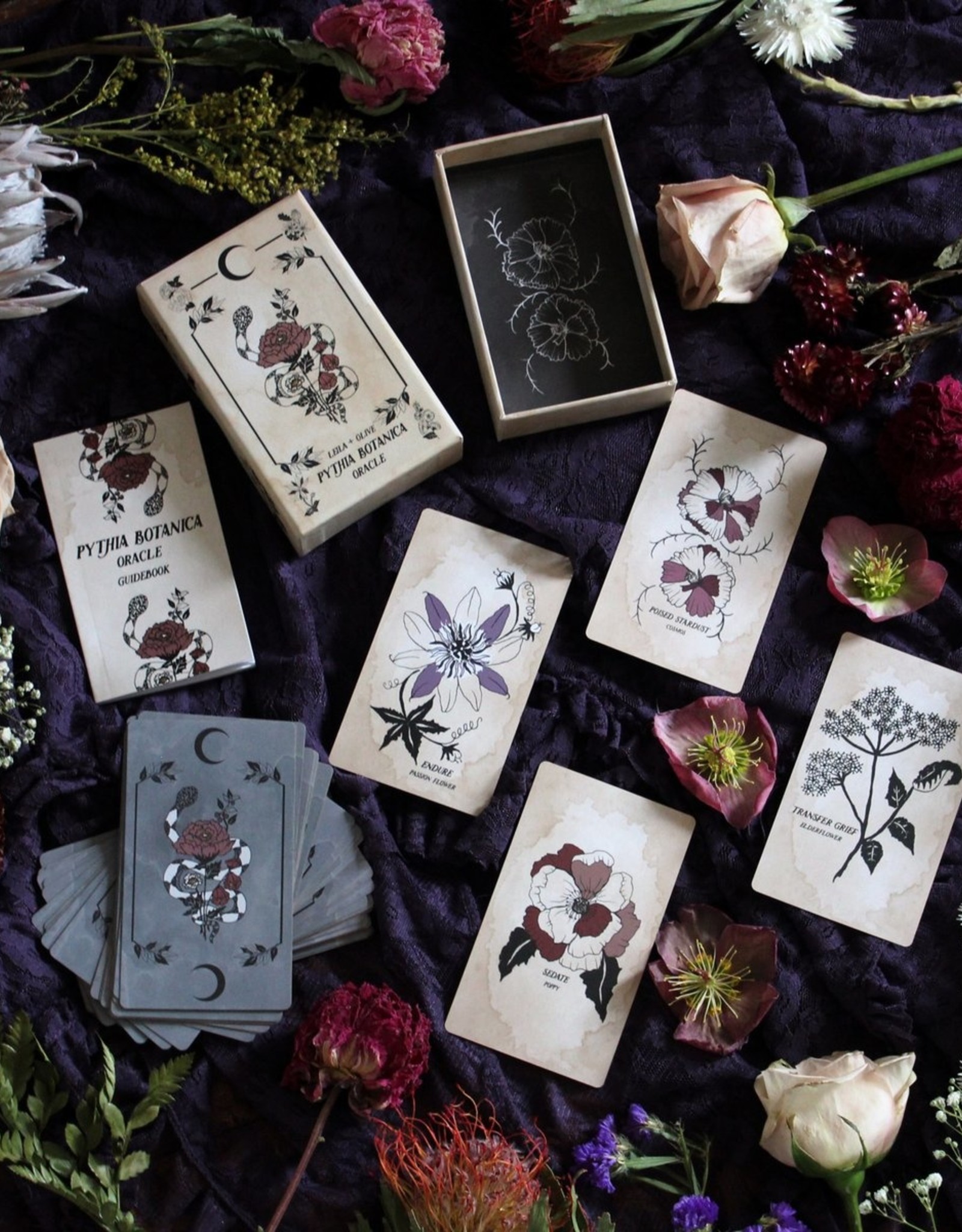 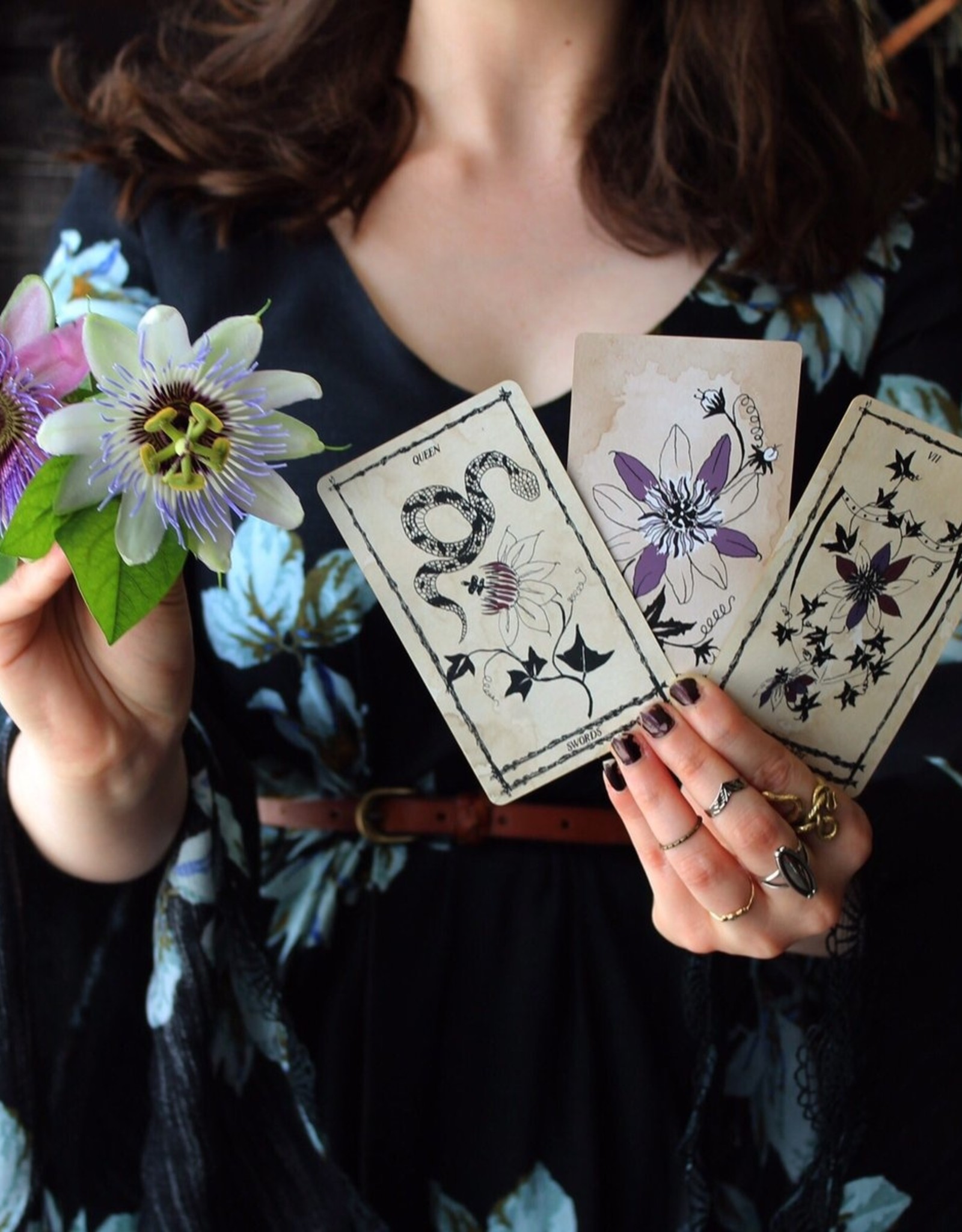 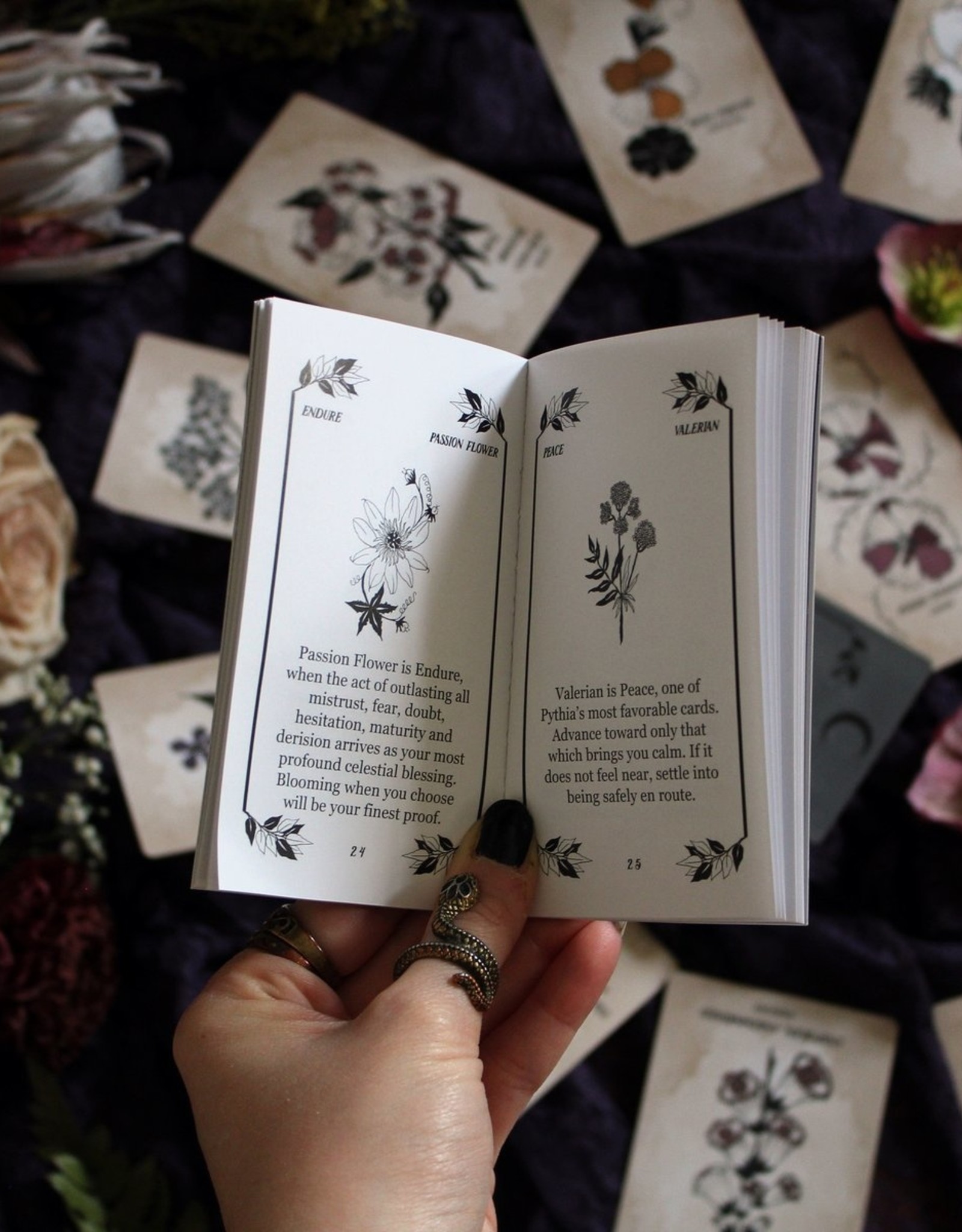 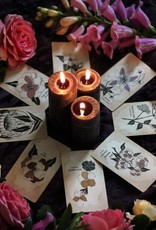 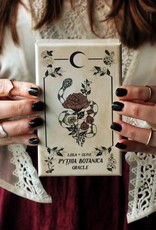 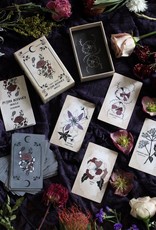 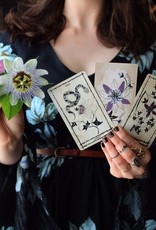 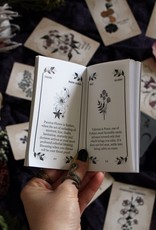 An intuitive Oracle deck rooted in mythology and infused with plant magic, the Pythia Botanica offers 48 cards that have been tea-stained and hand-illustrated by Nicole Rallis of Leila + Olive.

We invoke the myth of the Pythia, an ancient priestess whose visions channeled prophecies from Hellenic gods. Also known as the Oracle of Delphi, her divinations were steeped in mystery and enigmatic wonder―a trusted presage that loomed in the hearts of all women and men who sought to persist against fate. Each card's meaning derives from mythology surrounding the adorning herbs and flowers. Read these cards in traditional Tarot spreads and allow the spirit of these plants to guide you.

The Second Edition of the Pythia Botanica Oracle includes:
- 48 hand-illustrated & tea-stained cards.
- Beautiful, durable cards with Antique Gold gilded edges.
- A 54-page guidebook that fits inside the box, with instructions on how to read these card, corresponding botanical illustrations and meanings.
- A sturdy, two piece keepsake box.
Add your review
0 stars based on 0 reviews 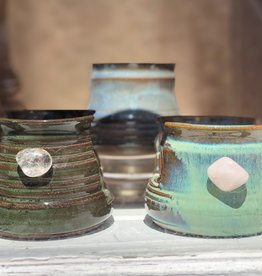 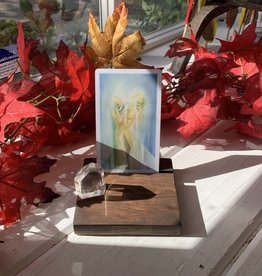 Handmade tarot stand for your pull of the day.
Place on your altar or in your Sacred Space to lean into your reading.
Add to cart
Single Tarot Card Stand
$16.00 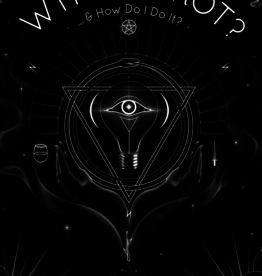 Young Blood, Old Magic: A No-Nonsense Approach to the Ancient Art of Reading Tarot
Add to cart
WTF Is Tarot?
$19.99 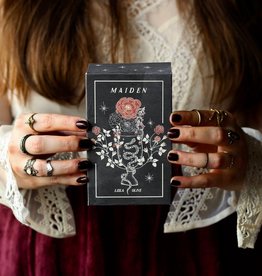 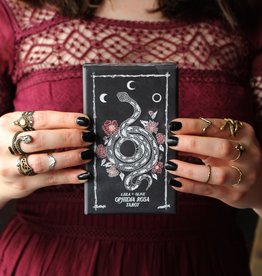 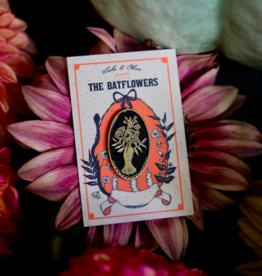 A haunted heirloom pin for the harvest season. The Ghost Harvest is gathered on antique gold enamel, for a haunted hayride or wherever one's Autumn dreams come true.
Add to cart
Haunted Harvest Pin
$17.00